Another short notice request came in to challenge our organisational powers (thank you to Jordan and James for being so efficient!). Our good friend and DP, Roger Laxon, from Flying Fern Films recommended for this one based on our experience of flying drones in tricky situations… and that it was!

Wild Pictures are the production company behind ITV’s ‘The Cruise’ and for the upcoming 3rd series, they needed sweeping dynamic aerial shots of the Royal Princess cruise ship out at sea. So the challenge was thus… fly from the bow of the ship (safe distance from the passengers) whilst the ship is cruising at 20 knots into a blustery wind.

Hmm… so there is a relative closing wind speed to contend with, as well as constant forward motion and turbulence on takeoff and landing. Not for the feint hearted! Drawing on our 10 years of commercial drone experience and the robust capabilities of the Inspire 2 drone,

we embraced the adrenalin and went for it. Landing in Santorini was quite spectacular… a stunning Greek island with bars, restaurants and shops perched impossibly on the cliffs overlooking a stunning sea view.

The only issue for us was the amount of luggage we had to drag through the tiny meandering streets to get down to the old port for transfer to the cruiseship.We boarded the mighty vessel with wide eyes (and a degree of trepidation!) The ship is absolutely MASSIVE – after an extensive recce and briefing with the captain on the bridge (a tech nerd’s sweet shop!) we settled for an evening drone session on the bow of the ship. A vibrant pastel sunset presented endless creative opportunities. We managed several flights in different light conditions, including night shots with a chance full moon. The impressive camera specs of the Inspire 2 allowed us to switch easily between Pro Res footage and high resolution aerial photography to give the client a variety of imagery for the series. One of the highlights of the trip was working with such an entertaining crew. Thank you to Rachel, Mark, Howard, Tom, Rhiannon, Selena and Zoe for a memorable few days aboard the Royal Princess cruise ship. 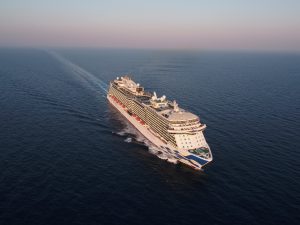